ecology
With growing economic activity in the Kerch Strait, significant hydraulic engineering changes took place, to be more precise, the Crimean bridge as well as the berthing facility of the Taman port were built and put into operation. Not to forget increasing intensity of shipping traffic, new inshore moorings in the Black Sea, transshipment of hazardous dry and liquid cargo through the Strait. It has significantly affected the hydrological and hydrobiological state of the Strait, as well as the aquatic ecosystem. As noted repeatedly, constant monitoring of the strait is essential.

Since 2009, SCANEX along with the Institute of Oceanology of the Russian Academy of Sciences have been monitoring petroleum seeps in the Black Sea with the Kerch Strait being one of the most problematic, thus, requiring particular attention. In July 2021 the research project named «Satellite-based Monitoring of Kerch Strait state: Modern and Retrospective Analysis» was carried out within the «Arctic and World Ocean Exploration» unit of the «Great Challenges-2021» program (Talent and Success Foundation), which took place in the Sirius Education Center based upon Geoatel’ye laboratory and led by the SCANEX and Institute of Oceanology specialists. One of the project objectives is radar monitoring of the Strait petroleum seeps over the 2020-2021 period, as well as its subsequent analysis with account of the results of the 2017-2019 period.

Pic.1 Petroleum seeps of the Kerch Strait and pre-strait area: a) ship spills on the main shipping lane; b) a large spill at the outboard berths of the port of Taman; c) technogenic petroleum seeps at the Crimean bridge; e) ship spills at reloading roadsteads in the strait; f) a large petroleum seep at anchorage in the Black Sea; d) natural oil show (lilac square - source)


For monitoring purposes, one used data from Sentinel-1A and Sentinel-1B, European radar satellites, along with the GIS-approach of the Geomixer service. Said approach along with satellite data are best suited for exploring spatial characteristics, as well as the timeline of multiyear petroleum seeps and/or oil slicks. In fact, pollution sources (Image 1) especially in the near-shore zones are automatically identified on integral maps (Image. 2a-в) based on data collected over a long period (Image 3).

Pic2a.   Maps of the distribution of petroleum seeps in the Kerch Strait and adjacent water areas in 2017 and 2018.

PIc.2b Maps of the distribution of petroleum seeps in the Kerch Strait and adjacent water areas in 2019 and 2020. 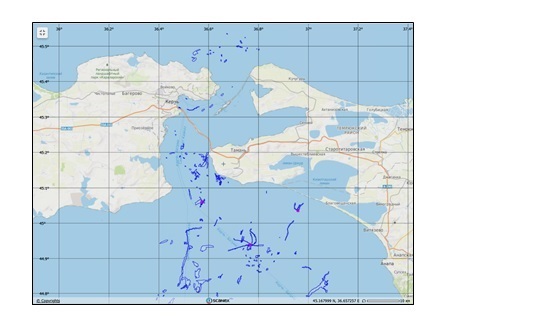 Pic.2c Map of the distribution of petroleum seeps in the Kerch Strait and adjacent water areas in the first half of 2021.

There are various kinds of oil pollution. There are ship spills of different chemical composition, discharges of remaining technical liquids used for hydrotechnical works. Besides, oil pollution may have natural sources in the pre-strait area: they are called petroleum seeps, and the most typical examples are shown (Image 1). As many as 460 radar images featured petroleum seeps in the Kerch Strait and pre-strait area over the 2017-2021 period. 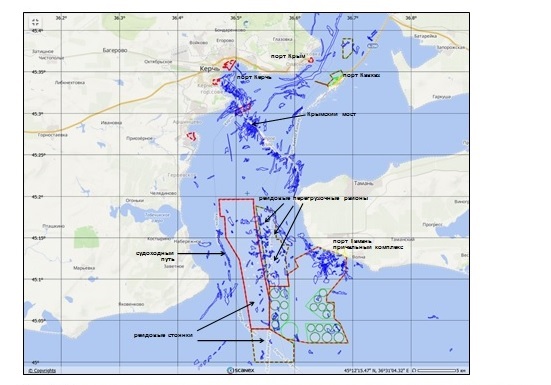 Pic.3 An example of identifying pollution sources: combining the integrated map of film pollution for 2019 in the Geomixer application. with the boundaries of ports, roadsteads and anchorages.

Oil slicks of small sizes are most often detected in the transshipment water areas and near anchorages №№ 450 and 451 (Image 1г, 3), where they appear as a result of transshipment leaks of oil products and other liquid substances. Radar images also detected spills near offshore mooring of Tamanneftegaz CJSC and Food Ingredients LLC in Taman port water area (Image 1b, 3), where along with leaks of oil liquids, contaminated water could be discharged directly from vessels during loading operations. 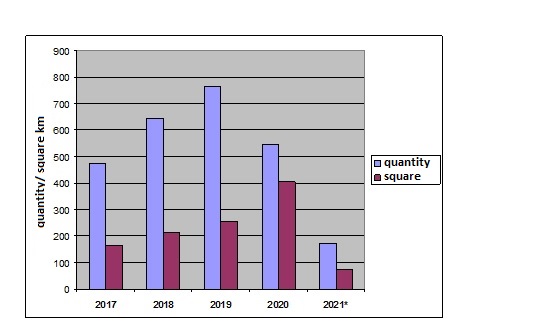 Pic.4 Statistics of radar monitoring of petroleum seeps in the Kerch Strait and adjacent waters in the period from January 2017 to July 2021.

Illegal vessel spills near the Strait were detected several times. Large spills often appeared at anchorages near the Kerch Strait in the Black and Azov Seas outside Russian territorial waters; one of the largest (about 50 sq.km) was spotted on 9.03.2020 (Image 1д). Previously, the area of oil splicks in this area did not exceed 20-25 sq. km.

Statistical analysis of radar monitoring results (Image 4) revealed the increase in number of petroleum seeps / oil spills across the Strait and pre-strait area after 2017. Said trend was described earlier. The upward trend was followed by the stabilization period and then certain decrease, which could be explained by the completed construction of the Crimean Bridge (since the beginning of 2020 almost no petroleum seeps have been detected) and decreased human factor. Meanwhile, large and even massive spills across main shipping routes and inshore moorings have never disappeared from the Strait and pre-strait zone of the Black Sea. One of the reasons is believed to be the fact that many vessels violate the convention on environmental protection given the absence of proper control on behalf of environmental agencies.

The pre-strait zone monitoring allowed experts to locate natural petroleum seeps, which are marked by squares (Image 2a) and are situated across the Kerch-Taman area of mud volcanoes and the Taman oil and gas bearing region. They are likely to belong to the same fluid dynamic system that the recently discovered petroleum seeps in the Azov Sea and near Bugaz Spit in the Black Sea.

«Geomixer service has been an effective tool in petroleum seeps monitoring over the 2020-2021 period, as well as in operational and retrospective analysis of satellite data. One may discover fascinating information in regard to the state of the Kerch Strait and even draw conclusions on current trends. The project was highly appreciated by the Talent and Success Foundation management that sponsored the «Great Challenges-2021» program held in the Sirius center», said Svetlana Klimenko, project manager from the Institute of Oceanology.

The «Great Challenges-2021» is a scientific, technological and project-based education program, which took place in the Sirius Education Center (Sochi) and brought together a record number of participants – 435 schoolchildren from 64 Russian regions. Pupils completed 80 projects in 12 priority areas for the scientific and technological development of Russia: from agro-biotechnology to artificial intelligence.

SCANEX has been a partner of the «Great Challenges-2021» program for many years: we have been supporting the STI MariNet unit dedicated to the development of the Arctic and the World Ocean. This year participants conducted six tasks proposed by partner companies: satellite monitoring of the Kerch Strait petroleum seeps, development of an unmanned solar-powered vessel and an underwater glider for scientific research, creation of a marine vessel tracking system based on artificial intelligence.

Satellite monitoring of the Kerch Strait petroleum seeps was based on Geoatel’ye laboratory system developed by SCANEX supported by the Innovation Assistance Foundation within the “On Planet Duty” program.

SCANEX is a part of «Project supported» group of GIS-Association portal.

SCANEX Group is a leader in the field of satellite monitoring, the only company in Russia and the CIS that receives data directly from Earth remote sensing satellites onto its own station network, then processes said data using its own technologies and provides access to satellite images and derived products via the geoportal web services of the company’s own design, which guarantees low-cost of data and prompt delivery.